How does it measure up in the LED age?

Induction lighting has been with us for a couple of decades. But is this ‘zero-maintenance’ low energy solution worth considering in this age of LEDs? How does it measure up to other light sources — and what are the drawbacks?

Induction lighting has become increasingly popular over the last few years, as developments in the technology have reduced manufacturing costs — and increases in energy prices and commitments to carbon reduction increase the demand for energy-efficient, low-carbon technologies. According to recent studies, when properly implemented, induction lighting can reduce energy consumption by over 50% and maintenance costs by 70%.

On the other hand, induction lighting provides a smoother, higher quality spectral output which is good for CCTV lighting applications and where a  client may want to eliminate flicker.

LED technology is temperature sensitive, which can lead to problems if heat isn’t effectively dissipated from the LED.  By comparison, induction lighting schemes have been running in London since the early 1990s and have proved induction to be a very stable technology.

In terms of optical output, LEDs produce very directional light, making it difficult to achieve good uniformity.  Induction lamps, on the other hand, are a large diffuse light source, so it is a challenge to control the output within a compact luminaire envelope.  In terms of cost, LEDs can work out roughly three to four times more expensive than induction lighting, the complete induction luminaire cost, is in line with the costs of more traditional technologies.

Overall then, where induction lighting has zero flicker, uses less heat, does not hum or produce glare it is certainly a cost effective technology worth considering.  None of this is to deny that LEDs are also an excellent source for low-energy, low-maintenance lighting – but it is important to understand the specific advantages that induction lighting can offer for particular situations. 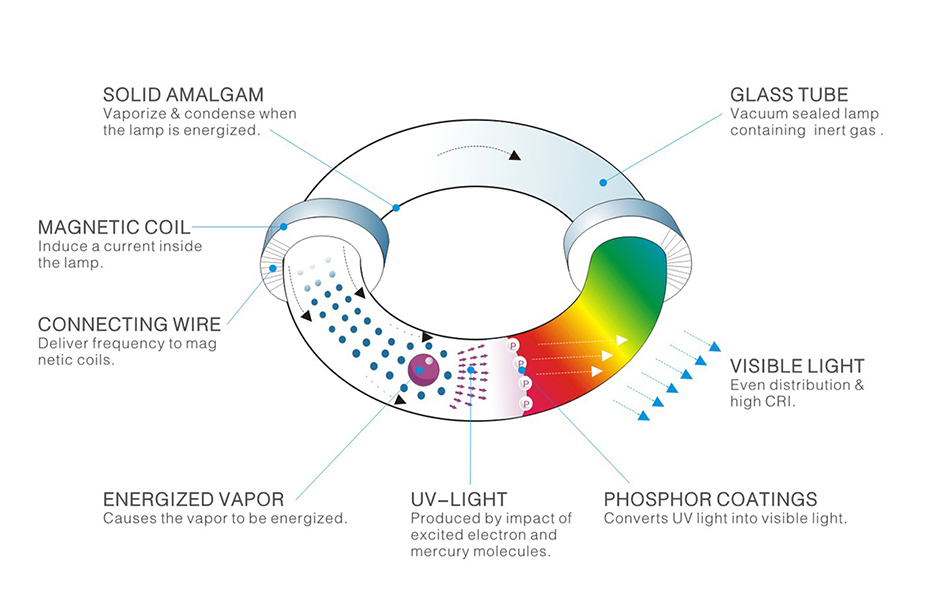 Cutting carbon
One of the main influencing factors in specifying road lighting is the commitment to cut carbon emissions. At present, many of the techniques employed to measure reductions in carbon output are relatively simplistic and usually only look at the direct reductions in carbon from energy consumption. Moving forward, governments are starting to account for indirect ‘whole life’ carbon costs — and as more sophisticated fiscal policies start to come into play, the benefits of long-life technologies, such as induction lighting, really become apparent.

Over the life of a single induction lamp, four to five traditional lamps would be required, so when you account for carbon costs in manufacture, logistics and disposal, induction lighting wins hands down. Carbon costs associated with maintenance may be even greater, especially when factoring in the carbon output of running fleets of lifters and diverting hundreds of thousands of cars (this can have the greatest impact with tunnel closures). In essence, low maintenance technologies such as induction lighting, provide an opportunity to significantly reduce the carbon impact of the transport infrastructure.

Reducing costs
With almost all purchasing decisions, the ultimate deciding factor will be ‘Does it offer improvements or reduce cost?’ More and more people are starting to consider the ‘whole life’ costs of installations, rather than just the initial capital outlay. This is sensible as it would obviously be a mistake to cut the installation cost by half, only to lose the money saved on additional energy costs within the first year.

Technology drawbacks
There are some shortcomings with induction lighting. One of the most obvious is that being essentially a fluorescent tube, the light source is very large. Although this reduces the glare, conventional optical control of the light source requires a larger reflector form in order to provide a wide uniform distribution of light. This isn’t such an issue in tunnel or industrial lighting applications, where larger light sources such as fluorescent or low pressure sodium lighting are commonly used. But in residential street lighting, where compact lanterns are popular, induction falls by the wayside. As residential street lighting accounts for approximately 70% of road lighting, in order to make a significant impact to energy saving, induction will need to overcome this challenge. INDO has developed an advanced optical solution, which enables their lamps to operate efficiently within a more compact enclosure.

The other downside is that as the lamp is phosphor coated, the lumen output depreciates over the lamp’s life. This follows an inverse exponential curve, common to many technologies, which tails off at approximately 80,000 hours. Unlike traditional technologies which tend to fail at 20,000 hours, an induction lamp does not catastrophically fail and will keep running for the rated ballast life of 80,000 hours. Current induction lamps will depreciate to 70% output by 60,000 hours and 66% by 80,000 hours. The challenge with road lighting is to balance the replacement period with a suitable maintenance factor (i.e. how far the lumen output is allowed to depreciate). We suggest a 15-year replacement interval allowing the light output to reach 70%. This period provides optimal balance between energy savings, maintenance costs and need to ‘over-light’ on installation. Research is currently being carried out into the phosphor coatings to reduce the overall depreciation rate.

Evidence on the streets
So how good is induction lighting in the field? INDO has been working with a number of local authorities in London supplying a range of street lighting units to maintain or improve light levels on London’s busy streets. Replacements have seen energy savings of 73W when replacing 150W units, equating to a whole life energy saving of £450 per unit and maintenance saving of £100 per unit. One aspect which is often overlooked, is that the induction ballast is electronic and therefore the circuit losses are only 5%, compared with the 15% loss of some magnetic ballasts (i.e. a 150W INDO lamp will consume a total of 158W, whereas a typical 150W HPS lamp will actually consume 178W).