The dawn of LED lighting has brought with it a raft of benefits when compared to traditional lighting sources, reducing energy consumption and maintenance costs across numerous industries and applications.

Energy savings are easily observed in practice, and can be compared across lighting solutions by a simple comparison of power or wattage.

Maintenance savings however, are often taken as a given. Of course we know that LEDs can last a lifetime, so what’s more to know?  Are there any differences between the market offerings? And if so, what is the best way to compare solutions to minimise lifetime costs?

These questions become particularly important where maintenance costs are significant, such as on London Underground’s network, where it has been reported that a single lamp change over an escalator can cost in excess of £1,000[1]. Clearly, in these instances, it’s worth going to some considerable lengths to avoid failures.  Street lighting, highways and indeed parking applications are other examples where the maintenance benefits of LEDs are likely to be of more interest than the energy savings for which they are perhaps best known.

To answer these points, we should first look at the broad categories of failures, summarised by the bathtub curve.

The bathtub curve is a graphical representation of the failure rate of a system over its life. It shows three distinct phases of failures, which can often be explained by physical phenomenon relating to that system.  On a statistical front, the curve is a sum of various Weibull distributions, and the general shape summarises the system failure rate over time of many things, from electrical circuits, mechanical systems (such as cars), through to biological systems and even humans.  The shape of the curve resembles the profile of a bathtub showing the chance of a system failing at the start as relatively high, reducing to a plateau, and then increasing again towards the end of life. 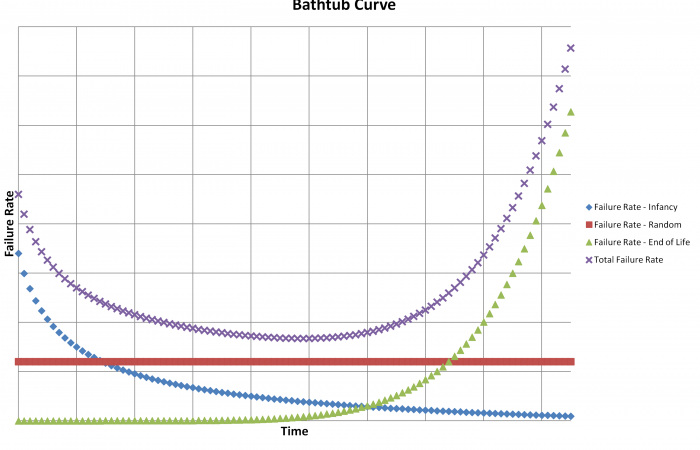 The first phase sees an initially high, but reducing failure rate and is concerned with early failures, or infancy failures.  These often relate to inherent problems of faults in the system that cause it to fail in the early stages of the expected life of that system.  There are numerous factors that can cause early failure, from genetics in a biological system to faulty components or manufacturing faults in manmade products.  Generally speaking, once this infancy failure phase has passed, a greater level of confidence can be placed in the system.  Factory testing is often carried out immediately after manufacture to identify any units which present early failure and remove these from the supply chain so they do not reach the customer at all.

The second phase of the system’s life is the normal operating life stage. The failure rate reaches a plateau and the chance of a unit failing is now independent of time. This is the most stable part of a system’s life and the failure rate at this point defines the “reliability” of the product.  Reliability is a statistical term relating to the chance of a random failure occurring (i.e. a failure that is independent of all other factors, such as life).  It is a measure that does not relate to lifetime, and should therefore be considered separately when evaluating a product of any sort.  What reliability tells us is the frequency of replacements that  should be expected within the normal operating life stage.  These types of failure are unavoidable and should be accounted for in any lifetime cost model.  Despite this, they are often overlooked and so it comes as a surprise when failures do occur.  Reliability is measured by the failure rate and explains how many random failures should be expected per million hours of device operation.  Since reliability is concerned with random failures, provided a system is within its normal operating life phase, the failure rate holds whether we are wanting to understand the likely number of failures within 100 products operating for 10,000 hours, or 10,000 products operating for 100 hours. Reliability engineering is a discipline in itself and covers a complex set of calculations and models for establishing the reliability of a system, based on such established systems as MIL-HDBK-217F.

The final stage of a system’s life is the end of life phase.  This is where the failure rate starts to increase due to wear-out effects, and is often termed as the expected life or rated life of the product.  The wear out effects are often introduced by specific parts of the system which, by their nature or position, are prone to wearing out; many components however exhibit no wear out effects at all.  Within electronics, there are several key components to consider for end of life effects – one of which is the electrolytic capacitor.  These components come with a rated life, and over time will wear out.  In mechanics, an easy example to visualise is the teeth on a cog which wear down as the system is used, ultimately getting to a point where they no longer function properly.

The expected life of a system is often calculated using guidance from the manufacturer of any such wear out components within the system, or can be calculated using accelerated lifetime testing. In such tests the system is subjected to extreme conditions and then a mathematical relationship used to calculate the expected life under normal conditions from the observed life under extreme conditions.

How to build this into a cost model

For lighting, and in instances where the replacement costs are medium to high, it usually makes sense to conduct reactive maintenance (which is the replacement of random failures) within the normal operating life , and conduct bulk upgrades close to the “expected life” of the product, by which point the ad-hoc replacements will start to become unmanageable.

The total life time cost of a product or installation typically consists of the following elements:

This total cost should then be divided by the lifetime of the unit to establish an annual cost, which can be compared as a like for like metric between lighting solutions.

From the above it can be seen that an effective way to minimise the annual costs of an installation is to increase the life time of the product.  By doing this, the fixed costs are spread over a greater number of years of operation.  As highlighted earlier, the life time of the unit is defined by the wear out components which, in the case of traditional LED drivers is often the electrolytic capacitor.  The lifetime of the system can be greatly improved by designs which avoid these components altogether; headway is being made by several lighting manufacturers in this area, such as INDO Lighting’s Direct Drive® technology.

It is essential to consider both lifetime and reliability to understand the true lifetime costs of a lighting installation.  Only when armed with this information can one truly compare two solutions on a like for like basis, thus determining to what extent the “fit and forget” philosophy holds true.

[1] “The one factor driving the adoption of LED lighting on the Tube”, http://luxreview.com/article/2015/06/the-one-factor-driving-the-adoption-of-led-lighting-on-the-tube, 26th June 2015