What is Direct Drive?

Understanding today what will cause challenges in the future isn’t easy but as the adoption of LED lighting increases, we are now starting to see more instances of driver failure in traditional LED units.

Thankfully, this isn’t a problem if you use INDO Direct Drive® lighting products.  Our pioneering LED technology has been specifically designed to improve luminaire reliability and lifetime by removing all wear-out components, primarily the driver.  Patented electronics within INDO units ensure the promise of a 25-year lifetime from LED actually delivers.

Typical assemblies within the market use a separate “LED driver” which is proven to fail and/or degrade long before the expiry of the LED’s serviceable life. Costly bulk driver changes or reactive maintenance is therefore typically required after around 5-7 years of operation.

Why is it that LED drivers are notorious for failing in an industry where products are marketed as having a lifetime of 20 years or more?  One key reason is the use of wet electrolytic capacitors.

These are inherent wear-out components which store charge and are housed within all traditional LED drivers, often deployed in two parts of the driver circuit. 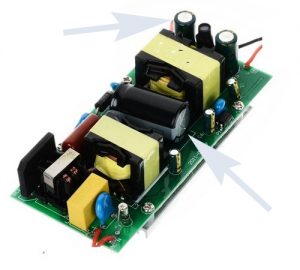 Capacitors comprise a liquid electrolyte which will naturally evaporate over time, (incidentally at a quicker rate at higher temperatures) altering the component properties. Depending on their position in the circuit, this failure results in a ‘catastrophic’ failure of the LED driver.

Once the rated life of these components is reached, a high level of failures will be observed, hence the need for bulk replacement.

INDO has eliminated the need for a driver;

It is this combination of advanced electronics engineering which enables the LED current to be carefully regulated, directly from mains voltage.

Built From The Ground Up

A proudly British innovation, which first came to market in 2010, the technology was developed by INDO’s Product Engineering Team, who took a much more strategic approach to luminaire design.

While manufacturers pull components and building blocks together from different companies to create their product design, INDO designs all its own circuitry in-house.  The team built the LED system from the ground up, rather than simply replicating the traditional HID luminaire manufacturing process.

Their aim was to better meet customer needs by matching the lifetime of ALL parts of the luminaire electronics to that of the LEDs themselves.  Critically, this has been achieved whilst ensuring equal or improved luminaire reliability, performance and functionality.

The lifetime of electronic components follows the “Arrhenious Law” which says that, for every 10° hotter the device is operated, its lifetime is halved.

Since an LED driver is both bulky and hot (around 30-40° hotter than the ambient temperature in fact), removing it facilitates more rigorous application of thermal design principles, which play such an important role in product reliability and lifetime

Being able to “identify, eliminate and control foreseeable risks that could arise at any time during the lifetime of a highway scheme” is one of the foremost reasons why Direct Drive® is so beneficial to the public lighting sector. 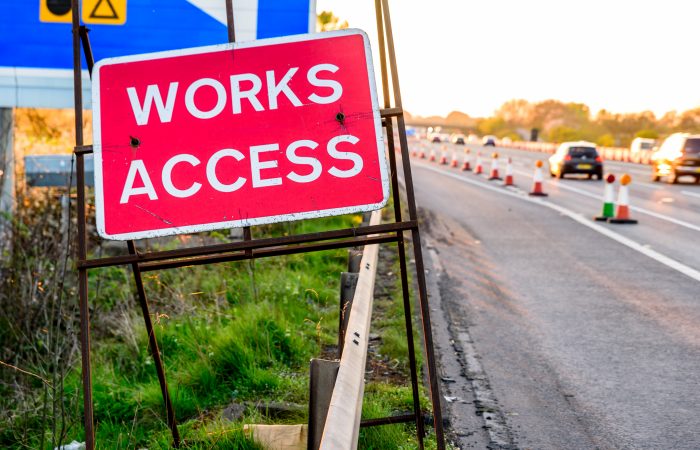 However, there are additional far-reaching advantages: 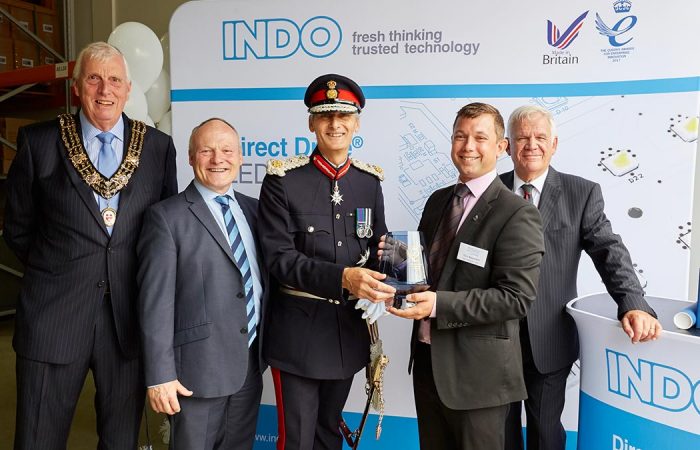 Direct Drive® first came to market in 2010 with the company’s retrofit lamp products; designed specifically for highway bollards and sign lights (T5UE and PLUE). Since then, the technology has been scaled and rolled out across the company’s street lighting luminaire range, decorative lanterns and retrofit gear trays.

As councils are increasingly challenged to find more ways to save money whilst simultaneously improving performance using environmentally sustainable solutions, INDO Direct Drive is able to tick all those boxes and more.

The benefits which this technology offers the lighting industry were recognised in 2017 when INDO was granted the highly prestigious Queens Award for Innovation.

And the success story was subsequently picked up by the Telegraph Business Club who produced this film for us:

To date, INDO now has over 200,000 Direct Drive® units installed across the UK and Europe. And the business is expanding rapidly year on year.  We’ve been increasingly successful in getting the Direct Drive® product range onto public sector procurement frameworks and continue to win many LED lighting upgrade contracts supplying thousands of products to clients across the country; from the Scottish Highlands and Cumbria through to Wales, Milton Keynes and Essex.