A look at different measurement techniques for LED luminaires

When designing for a street lighting installation, the quality and accuracy of photometric data is of paramout importance. You’re probably aware that manufacturers’ data can be presented in two formats; absolute photometry, and relative photometry. But which format should you use? Is one more accurate than the other?

The quick answer is no, they both give the same results. Let’s look at the two approaches in more detail to understand why this is the case.

Relative Photometry: Breaking down the elements

Relative photometry is based on splitting out the measurement of a light source (or “lamp”) in isolation and then a measurement of the whole luminaire output. From this, the light output ratio  (LOR), or optical efficiency of the luminaire is calculated.

Relative photometry files are presented showing the lumen output of the “lamp” as well as the output of the luminaire. This has been proven to work particularly well for lamp technology, where a lamp is tested alone before being placed into its housing and tested separately in a goniophotometer to determine the losses from reflectors and covers etc. Ie once the luminaire distribution and lamp output are known, it is straightforward to understand the effect of increasing or decreasing lamp output on luminaire output. This feature is still displayed within photometry software, where the user can see the ‘lamp lumens’ of a source (without optical losses), and then ‘luminaire lumens’ – lumen output after optical losses.

By contrast, absolute photometry is a technique that simply measures a complete luminaire to provide results for that exact configuration. 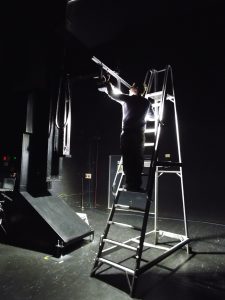 How does this difference in file format affect lighting design?

Actually, it won’t affect design at all. Why? When using either absolute or relative files, luminaire efficiency is automatically accounted for.

With absolute files, only one lumen output is stated and, since LOR = 100%, this is the output of the luminaire. In a relative file, lamp lumens are shown with the efficiency factor automatically applied for calculations. A key principle which must hold for relative photometry to be valid is that scaling of lamp lumen output must occur without having an effect on lamp photometric distribution. For LED luminaires this is indeed the case where the output is increased by increasing the LED current but is not the case where increased output is achieved by adding more LEDs. In that case, a new round of photometric testing is required.

On that basis, design software treats absolute and relative measurements of the same luminaire identically in terms of distribution, lumen output and power consumption. This means that, whether you’re using absolute or relative photometry, the results will be identical. 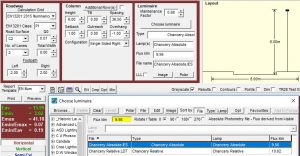 Figure A (above) – shows an example calculation using INDO CHANCERY photometry, in the Absolute format 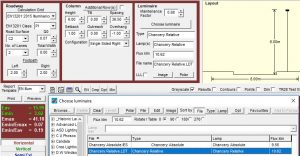 Figure B (above) shows the same calculation using INDO CHANCERY photometry, in the Relative format – Note the calculation metrics and results are unaffected

But what do the standards say?

What do the standards say about different measurement techniques? IES LM-79-08 requires the absolute method as the standard testing methodology, whilst IES LM-80-08 and IES LM-82-12 both use the relative method. IES TM-21-11 also takes the relative format data from LM-80 and extrapolates it to calculate luminaire life. Luminaires should be photometrically tested to LM-79, but other standards require alternate testing.

Some may suggest not only that the absolute method ought to be used for measuring luminaires but also that the same luminaire running at a lower wattage requires a separate absolute test. However, if the number and placement of LEDs is not changing, the photometric distribution doesn’t change.

In this case, relative photometry is the more cost-effective, easier-to-use format, not least because it allows quick scaling during lighting designs. In the context of dimming, when LEDs are dimmed down, it is only necessary to consider reduced lumen output in the lighting design.

If different absolute photometry files are provided for various output levels of the same luminaire, the suggestion is that a designer would need to load a new photometric distribution every time a dimming regime is considered. This again creates unnecessary additional work and cost, which simply doesn’t make sense.

Understanding photometric data first and foremost requires communication with manufacturers – finding out what kind of photometry is being provided, how it has been tested, and why it was tested in that way. Some may say one format is more beneficial than the other and should be used in isolation. However, as you can see, the truth need not be so absolute!